I’ve ignored the news for a long time, but ever since earlier this week, when I briefly became part of it, I’ve been going back to check the comments under my online article, and in the process of doing so catching glimpses of articles and links I can’t help but click on and then google so that I can cross-reference the story with several competing media outlets.

I’ve been so fucking mad the entire time. It stresses me out! I’ve got to make my exit soon before I punch somebody in the fucking face.

People are acting so fucking stupid. Everybody on both sides of the political “war” are so propagandized with total bullshit that I’m just flabbergasted.

I can’t believe Trump’s supporters revere him so much that they’ll find a way to justify anything he does, because they view him as some sort of messiah who’s going to turn America back into the Norman Rockwell painting it never really was. I can’t believe Bernie Sanders’s supporters think of him as some kind of superhero who’s going to transform the world into a Star Trek: The Next Generation-like utopia. 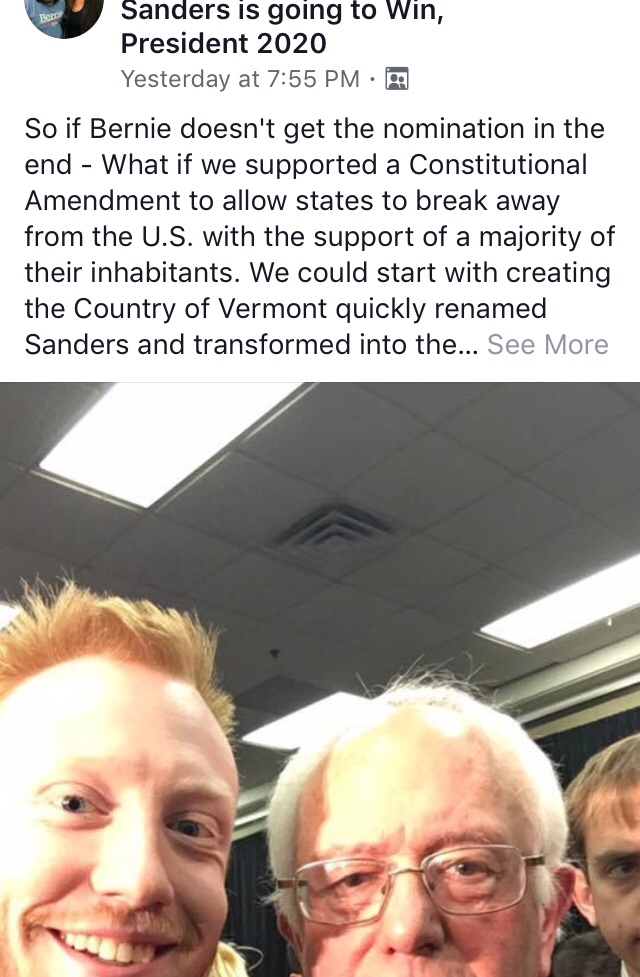 I joined several Facebook Bernie Sanders groups to share the article, hoping to piggyback on Sanders via the article to promote myself.

I felt like I’d stepped into some kind of weird church, reading their posts. It’s just so fucking bizarre and creepy to see people heaping such unconditional praise and adoration upon another human being.

I was already used to the Trump church, which is exactly the same but with more taken-from-below POV sunglasses driving selfies.

The church of Hillary is an altogether different animal. It’s a bunch of snooty New England-ish turtleneck wearers who revere Hillary–who isn’t even a candidate–as much as the other churches revere their messiahs, except they they tend to express themselves more eloquently. They’re also passive-aggressive pieces of shit. They say mean things about the other churches, but in more clever and subtle ways.

All of them scour the Internet for articles that reinforce their beliefs, and when they find one, if it tells them what they want to hear, they file it away in their brains as fact. Doesn’t matter who wrote the article, where it came from or what sources they used besides the inside of their own ass–the believers believe.

Then they spread that belief around, all saying the say things but presenting them as original thoughts and calling everyone else either “sheeple” or some equivalent term.

If people cut themselves off from any source of news for a full week I guarantee that at least some of them would be shocked at what they saw when they came back. This is fucking hysteria, people. Get a grip.