Hearing Welcome to the Jungle as a fifth grader in 1987 is one of the most important moments in my life.

That rage-fueled voice, that fuckin’ guitar. Those drums, tho. Holy shit, what is this?

I called the local radio station to request it one day, so I could record it, and they told me they couldn’t even play it until after 10pm. Eventually I captured it, as well as Sweet Child and Paradise City.

A friend who had the album eventually dubbed me a copy, because I would never have been allowed to own it. I listened to that fuckin’ tape every day. I still listen to Appetite for Destruction at least a couple times a week. It’s me. It’s in my blood. It’s in my heartbeat and brainwaves. That album, GNR Lies and Use Your Illusion 1&2 became the soundtrack to my adolescence. I took it everywhere. In my head, in my Walkman, in my walk, man. It emboldened me, made me feel like I was a part of it. My first girlfriend thought they were gross and hated them. Even she had to reluctantly admit liking November Rain, though. 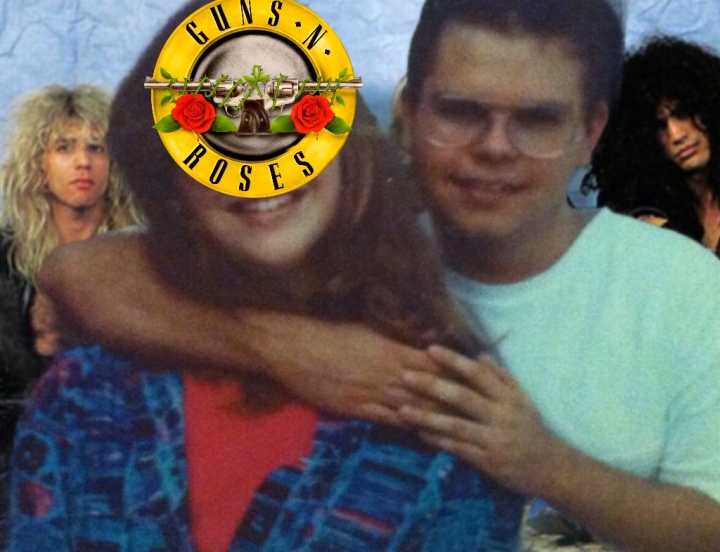 I taped every interview on MTV. I read every magazine interview and article I could find.

After awhile, between Axl’s cryptic lyrics, antisocial public behavior and what he said in interviews, I realized that he and I were kindred spirits.

He’s short-fused, defiantly stubborn and a little unhinged, but there’s a lot of depth beneath that. There’s a dichotomy about it, the way he can convey heartfelt sentiment one moment and then let loose with a throat-ripping scream that comes from a deep, dark angry place. I feel like that. I flip out at people who fuck with me at the drop of a hat, and I resent people telling me what the fuck to do. When he just goes fucking off on a song, I know that’s real anger. I can tell. For him, there were no lines between stage persona and offstage persona. He was just Axl all the time.

I called a woman a stupid old cunt at 7-11. I stuck my head out the window at a stoplight and flipped off/cussed out some dude honking at me. I chased a solicitor off my porch once, screaming very non-PC obscenities at him. I got in a fight with some drunk dude at my job staring at me. I do stuff like that, but then women think I’m such a sensitive sweetheart.😂 (Because I am. ) All very Axl-ish stuff. It just comes out. That’s why it’s never fazed me, all the stories about Axl being a dick. I get it. Fuck ’em, come at me with disrespect and you’ll get it right back up your ass. I’m not saying that’s the right way to act, by any means. Of course it isn’t, and I strive to avoid that. But sometimes you lose control. Is what it is. What I learned from Axl is that when people try to tear you down or take the wind out of your sails, you don’t have to tolerate it.

The other day, I was blasting some cannibal corpse at work and my boss walks in and looks like he just stepped into a fart cloud. “What is THAT?”

“I can’t understand the lyrics. I’m more of a George Straight guy.”

“It sounds angry. Are they angry?”

I shrugged. “Not particularly, I don’t think.”

See, there’s a difference between aggressive and fucking angry. You can growl and scream and be aggressive but real anger is real anger and I can tell when it is. I hear it clearly in Axl’s voice.

People hated on him and still do–they say he’s arrogant and egotistical, nitpick his performances and whatnot, and he’s never given a single fuck. I’ve always loved that. He knows he’s a musical and philosophical visionary, and he’s never let anyone compromise that. He feels beholden to no one.

Clearly, a lot of guys relate to Axl in the same way as I do. I’m not claiming that as something unique to me at all. It’s a beautiful thing–To people who’ve been shit on and beaten down, hes an avatar for their rage. He came from nothing and climbed his way up into the upper echelons of wealth and privilege, and started stirring shit up, and had so much clout that he couldn’t be touched. For anything. Kind of like NWA, who Guns has much more in common with as far as energy and attitude than any mainstream rock band in the late 80s.

They were mutual fans of each other and nearly played some shows together. Eazy-E at one point recorded a song with Duff and Slash.

To this day, Straight Outta Compton, Appetite for Destruction and Lights, Camera, Revolution from Suicidal Tendencies are my go-to albums for when I’m so pissed off that nothing else will do. That’s because it’s real anger, real pain. Real confidence. It’s authentic.

Guns N’ Roses is my favorite band of all time. As we circled the venue in downtown Oklahoma City last night looking for parking, and walked half a mile past tons of cops, people having hotel patio parties, homeless begging for spare change on corners, a street performer playing a sax, and lots of leather-miniskirted cougars with their titties popping out, I had the sudden realization that Axl was inside that building that I was walking up to.

Long time ago, I ran into Matt Sorum, the Illusion-era drummer for GNR, backstage at a Saxon show. His wife is from here. We were both drunk, and we chatted awhile and it was really cool. I kept thinking “I’m talking to someone who played with Axl.” So, imagine how much more exited I was to actually see the mighty GUNS N’ FUCKIN’ ROSES play.

The place was full of people who don’t know concert etiquette, how to cut through crowds and how to sidestep/get the fuck out of the way. You just kind of have to bump ’em outta the way and keep moving.

When I finally stepped into that arena and saw this, I got chills.

Now, I’m not a reviewer. I couldn’t be one, because I don’t like to trash shit I don’t like. That’s the territory of negative hater assholes who like to tear art down. Somebody gets out there and achieves their dream and expresses themselves and you wanna shit on it? Axl and I have always been in agreement on that.

There is absolutely nothing about last night I didn’t like, so even if I was inclined to complain about something like a snarky little internet candyass critic, there’s no ammo to work with. This is going to be a gushing, praise-lavishing account of the show and how it made me feel, so look elsewhere if you want a real “review.”

We had just sat down when the house lights went down and the intro animation appeared on the giant backdrop screen. It was the robot from the original, uncensored Appetite cover doing a lot of…stuff? I don’t know. Whatever. My heart started pounding. I don’t even remember what the announcer said, except for the last part: “Guns…N’…ROSES!!!!” 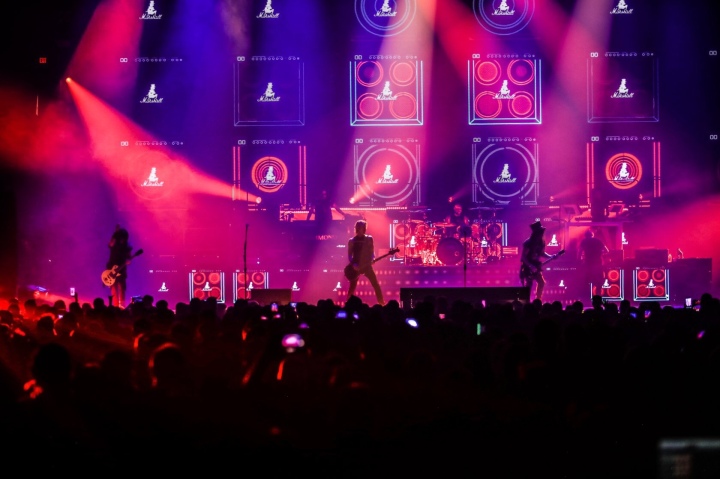 Slash walked out from one side, Duff from the other. There, right there in front of me, with his top hat, was Slash. I was in the same room with Slash. And Duff! Fuck! I was trembling. Axl emerged from the shadows and took center stage. I was looking at Axl Rose in person. Not on TV, not in a magazine, but right there in person. They opened with It’s so easy, one of my favorite songs. I was floored and I almost cried. The whole thing was an intensely emotional experience for me, and even though it was a big corporate rock show of the type I usually eschew in favor of underground metal shows, it didn’t feel like that.

As I looked around, I saw that a lot of other people were having an experience similar to or nearly identical to mine. Guns has touched people. Millions of people. It was something real and untamable that crossed the corporate chasm between artist and fan and resonated, deeply. 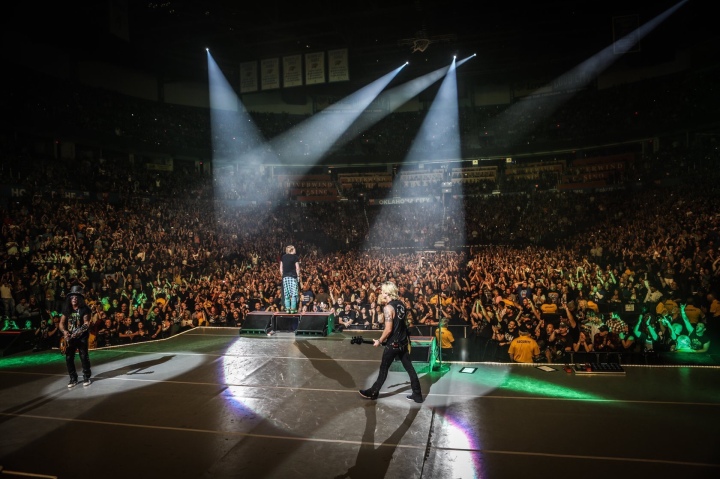 They rolled out Axl’s piano for November Rain, and there was a sound issue. The stage crew ran out with flashlights and Axl got a little irritated, told them “Alright let’s do something else, and get this piece of shit off the stage, thanks!”

Issues were resolved, and the piano came back out after a couple songs.

They did a cover of Glenn Campbell’s “witchita lineman,” which was amazing.

Duff came to the front of the stage and played his Johnny Thunders/Misfits covers, lots of extended jam sessions, etc.

When the show closed with Paradise City, cannons blasted confetti into the air. It was a magical experience, and I almost feel like a changed person, in a way. I’m still floored. I finally got to see and it was all I knew it would be.