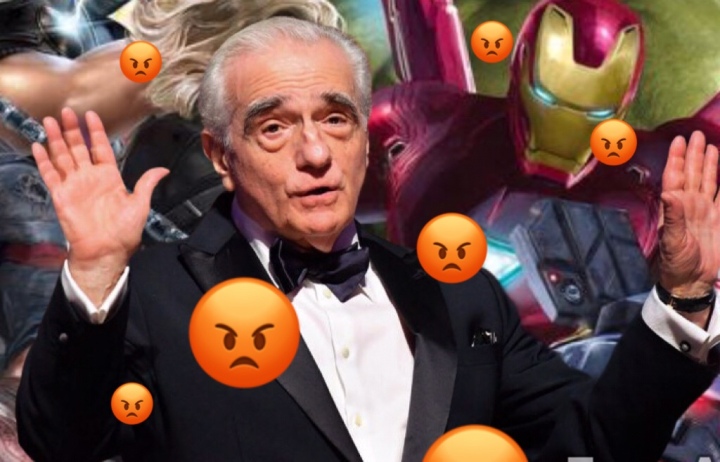 Remember when people lost their minds because Martin Scorsese said that Marvel movies weren’t for him and that they weren’t “cinema?”

Scorsese wrote a very thoughtful reply to this backlash, further clarifying his position. In it acknowledged the artistry and talent of the people making these movies, which is commendable. It’s good that he said did that, because those people deserve those accolades.

Overall, though, he was nicer than I would’ve been. I would’ve asked those people how my lack of enthusiasm for a thing they liked diminished their enjoyment of it. I’d probably have told them to fuck off while I was at it, because I’d be annoyed.

We’re spoiled children living in a self-absorbed age in which we demand the world around us alter itself to suit our tastes and whims.

So Scorsese isn’t interested in movies about guys in colorful spandex fighting crime, but you are, and you can’t stand that he won’t give his stamp of approval to them, so now he’s shit. He’s cancelled. Hashtag standwithMCU! I mean, what else can you do? What other option do you have? Someone out there doesn’t like a thing you like, and they must! Damn it, they must!

Here’s another option: let it go. Let it go like you’ll have to let what I’m about to say go because I won’t respond to you: I don’t give a shit about Marvel movies.

Yeah, I loved comics as a kid. I grew up with them and I occasionally still read them–especially silver and Bronze Age reprints.

I liked the first couple X-Men and Spider-Man movies. Saw the Avengers, liked that. I liked the Fantastic Four movie that everyone hated. Ang Lee’s Hulk sucked ass, in my opinion. I liked the Thomas Jane Punisher movie. Iron Man was pretty good…

I quit caring because they started cranking these things out at a rate of about one movie a month, and now it’s just not that special anymore. It’s not an event when one comes out, because they’re a dime-a-dozen. There’s no waiting, it’s just MORE MORE MORE, NOW NOW NOW. And it’d better be the most outlandish fan service Mary Sue bullshit ever, or else a bunch of fucking nerds will screech about it.

I’m not dissing the movies at all. I’m glad people dig them. I’m just not interested anymore, and that upsets people, when I tell them that.

And I don’t go around volunteering this information–they ask for it. They ask me if I’ve seen the latest Thor movie. No. I haven’t. Why? Because five or six of the motherfuckers come out a year and I don’t even typically watch six movies in a year at this point in my life.

I like comic movies, and I’ll watch one now and again, but I also want to watch movies about real people getting involved in plausible situations. Movies without superpowers and shooting and explosions. Movies with dialogue. Movies that didn’t cost a kajillion dollars to make. Movies stemming from a single visionary’s imagination. Everything’s gotta be a “franchise” now, though. Everything’s gotta be bigger and and more over-the-top than the last thing.

Point is, I’m glad these movies exist and that people love them. I get it. This isn’t about the movies themselves, because I do like them when I see them. But if I don’t like them, or don’t see them, that doesn’t mean I’m a “moron” just because you do.

There’s more outrage about someone expressing indifference to a popular franchise than there is about Hollywood being a country club for sexual predators.

I asked myself if I’d have been mad at Scorsese if the MCU had been a thing when I was younger and would’ve been all about it. The answer was no, because he made Goodfellas.

I read an interview with Robert Plant once, back when I was a teenager, in which he essentially called the entire genre of heavy metal shit. It didn’t make me stop listening to Led Zeppelin. It didn’t make me enjoy Iron Maiden any less. I understood that this was his opinion and that he was entitled to it, and I didn’t care.

Remember when Stephen King dissed Twilight, Fifty Shades of Grey and The Hunger Games? People were either thoroughly pleased that their own hatred of said books was validated, or angry that their love of them wasn’t. If I was into those books and Stephen King, I wouldn’t have stopped reading Stephen King in protest. That’s stupid. Save that kind of anger for people who have done truly horrible things, not people who don’t share your literary interests.

And let us not forget why these things come up: the media asks these people for their opinions, and then they get paid when controversial statements generate ad revenue. It’s no coincidence. They want you fighting with each other over stupid, piddly bullshit because they get paid for it. Every time you post an irate comment under an online story about Scorsese Vs. Marvel, you’re putting money in the pocket of some muckraking parasite.

When the news shares a clickbait story and you bite and start arguing in the comments, YOU ARE BEING MANIPULATED. They want you to do that. They know what pushes your buttons.

Take the bait if you must, but get “woke” to the fact that you’re being used.