I’ve been watching (because it’s in my face and I can’t avoid it) this heated exchange between people who are gung-ho about opening everything back up vs those who want to keep everything locked down for awhile longer.

You call these people idiots for wanting to go back to work, but from what position are you judging them? Are your basic needs assured? Are you going to be okay financially if you stay home?

Yeah? Great! But imagine your small business going down the tubes along with your dreams, and after a few months of nice, warm, fuzzy TV commercials about how much they care, the banks are going to be beating down your door to hold you upside down and shake the change from your pockets.

There is no safety net for most people. You ask them if their lives are more important than money, but where are they supposed to continue to live those lives? Are you going to let them crash at your place? And quit acting like you don’t go to the grocery store every day, like everybody else. You don’t mind those people having to work, do you?

Who will be left standing after all of this? Will we be left with nothing but big box stores and chain restaurants? I mean, that’s not a problem to scoff at. That is a horrible, toxic development.

For many, this isn’t a case of a “temporary sacrifice.” Don’t tell them that they don’t value life simply because they must work to survive. And I mean survive long-term–you’ve got people going into debt the depths of which they’ll never climb out of. Life sucks from here on out, because the system is set up to bleed you dry. It kicks you when you’re down.

On the other hand, how can you just say “Fuck it, let’s all just go out there and get infected, and whoever dies dies?”

There is no easy answer, and nobody knows what to do. I don’t know what to do and I’m not claiming I do. I’m wary of anyone who claims otherwise.

The virus has been so thoroughly politicized at this point that each side has fully integrated it into their respective narratives. You’re supposed to pick one truth or the other and fully embrace it.

As usual, the solution lies somewhere in between these two extremes, but neither side will budge–just a lot of wheel-spinning rhetoric to disseminate down to the masses so they can share their righteous outrage on social media. They’re told what to get mad at and what to attack, and they obey because it’s what their team is doing. Key players from both sides are presented as villainous, mustache-twirling bafoons by their opposing teams.

We need conservatives for their cold, hard, empathy-free facts which reel in liberals’ sometimes overly ambitious flights of fancy. And we need liberals to move us forward. Conservatives are needed to pump the brakes once in awhile and say “Whoa, slow down.” Otherwise society would be a really unpleasantly weird thing that would ultimately collapse on itself. Just as without liberals, we’d get something equally awful. Probably worse.

We can’t come up with a solution because anything that Trump does or puts his stamp of approval on will be greeted as evil or racist or… whatever by default. And by the same token any facts that make trump look bad will be greeted as “fake news” by his supporters. Meanwhile, people will just continue to die.

Trump could conduct a press conference atop a mountain of COVID corpses and be like “We’re winning this thing, anything bad you hear is fake news.”

A reporter would ask about the bodies he’s standing on, and he’d be like “You’re a terrible reporter. My ratings are sky high. By the way it’s much worse in (insert random country name here).” And then a video clip of that press conference will be circulated around social media with a title like “Trump DESTROYS reporter!” Facebook video thinks I want to see all of these because I clicked on one once, I guess. All these roid-raging manbabies pulling out their little dicks and jacking off every time Trump is a total asshole to somebody. 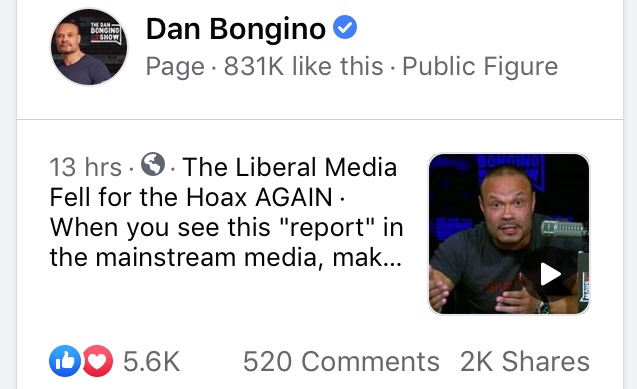 That’s where we’re at now, as a society. We deflect, assign blame, get in some sick burns on the opposing team, and call it a day.

I don’t know what the solution is, but I certainly recognize that the longer this shutdown is permitted to continue, the more damage will be done. It’s clear that the powers that be, on both sides of the political fence, are flying blind. No one knows what the fuck they’re doing.

None of it makes any sense, and reopening now renders shutting it down in the first place pointless. We’ve given control of our lives to a government that doesn’t know its ass from a hole in the ground. Small businesses lie dying in the gutter while their big corporate competitors report record profits.

In the meantime, as an expendable, “essential” worker, I have worked the entire time, with the public, and that’s just how it has to be. I’m glad I’m working. I can’t afford not to. I’m very fortunate and grateful for that. I know how to be careful.

Even so, it’s scary out there. You think I risking life and lung every day? And it’s not just the virus that’s scary, but us as well. People are scary. The government control is scary. People submitted to it without any resistance and began shaming anyone who said “Hey, wait a minute…is this all on the level?”

Bunch of people working from home in bed on their laptops screaming “I trust science! I trust the doctors and scientists!”

No you don’t. You trust science that backs your political narrative, just like Trump supporters do. It’s all so silly.

So we’re all supposed to be so grateful for these stimulus checks(still haven’t gotten mine), which amount to pretty much jack squat in the grand scheme of things. I won’t say thank you. I’ve been ripped off enough that I’ll snatch that check right out of their hands like “Gimme that shit. Yoink!”

But anyway, like I said, I don’t have a solution. I don’t know what to do any more than anyone else does. Difference is I admit it. Can you turn off CNN or Fox News for a moment, think about the whole thing critically, and do the same? Can you cast your biases and loyalty to your team aside in favor of truth, or are you going to stick to the narrative that you’re being told to follow and admit that neither they nor you know what the fuck to do?

The coronavirus is not a “fake news hoax.” It’s very, very real.

I have to believe that somewhere in between the two extremes available, that there is a sensible course of action to take. We will never discover it, though, and that’s just the way it’s going to be, because empathy continues to elude most people. We’re just going to point fingers and call each other stupid and crazy. The virus is ultimately in control and we’re all just along for the ride.