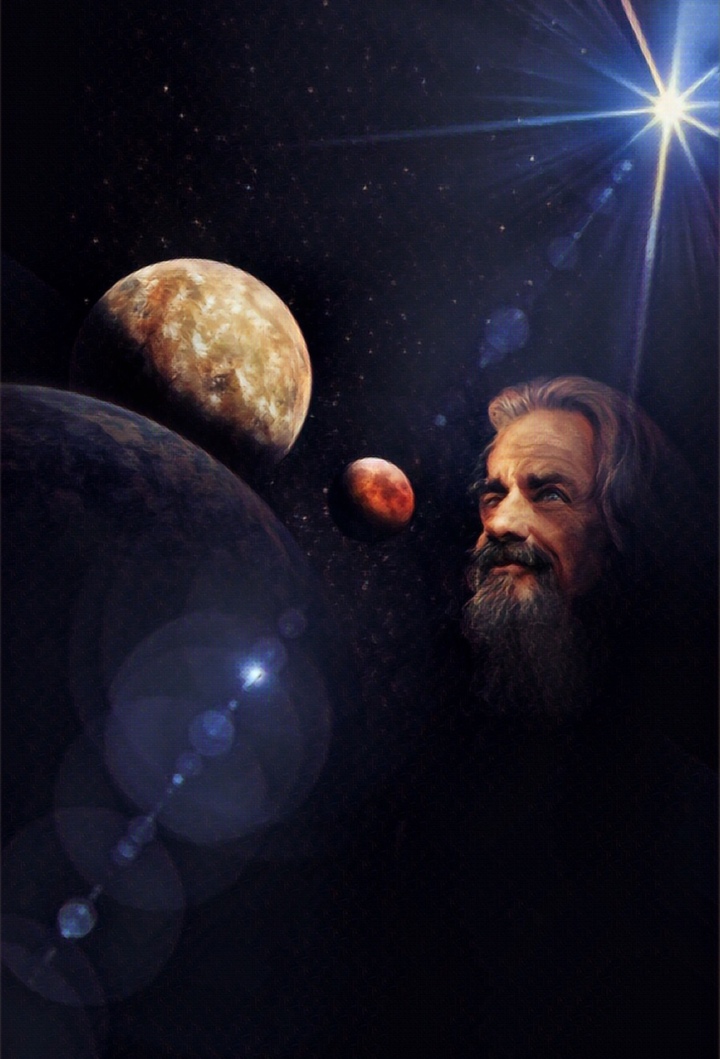 Proeliator Latro leaned over the railing encircling the balcony outside his chambers and surveyed his kingdom.

“Lovely view, isn’t it?” he asked the woman standing by his side. “Especially at night, beneath full moons.” His shimmering blue cloak fluttered in the cool midnight breeze.

“To one who knows only barren, desolate plains full of dry bones, it is paradise,” she replied.

Amidst the wild, twisting spires of skyroots that covered much of Bellum were a million tiny lights. Each light, Latro knew, represented one or several lives, and he cared deeply for each and every one of them–for he was a righteous leader who loved his people.

Under his guidance, Bellum had become the mightiest planet of all the colony worlds. He himself had led the invasion of Anshar, freeing hundreds of thousands of slaves and offering them, mere offworlders, an unprecedented chance to be annointed as soldiers. It was a proposition most of them accepted with grateful vigor, nearly doubling Bellum’s fighting forces.

Many in the Tribunal and even the populace itself believed the seizure of that precious gas to be Latro’s primary motivation for invading Anshar. Indeed, the action came with the unintended consequence of making him the most celebrated Proeliator since Telan himself.

He wasn’t without his detractors, though. Older Bellumites scorned the idea of fully anointing offworlders, but change had been coming for a long time, by then, and integration was achieved without much of a fuss.

“It is paradise,” he said. “No matter where one comes from.”

He pivoted and invaded her eyes with a sudden, penetrating gaze.

“We have fought hard to make it one. And to keep it one. All of this, though…” he paused and made a sweeping arm gesture across the twinkling, moonlit forest. “This is but a small taste of what we can achieve.

“Stop that. Stop humoring me and listen. Really listen. I’m not just spouting a lot of esoteric mumbo jumbo.”

“My ultimate goal, during my tenure, has always been colonial unification. The formation of a vast galactic empire, with Bellum at the center.”

Her eyes widened. “The Tribunal would never–”

“The Tribunal is obsolete,” he said, cutting her off. “Day and night, they beat the drums of war, rousing our warrior spirits with hatred for the wrong enemy. Tell me, Missilia, who is our enemy?”

She knew it was a trick question, but she didn’t understand its point, so she answered as he expected her to.

“Novus. Baltu. Anyone who opposes us.”

“All human worlds, full of people just like us. Did you know there used to be nine? Now there are six, thanks to TREE. I ask you again: Who is our enemy?

“Yes,” said Missilia, “TREE is our enemy, but it hasn’t been an immediate threat in over a thousand years. It’s made no further attempts at expanding its territory since then.”

Latro jabbed a finger at her. “Wrong. It is always a threat. The only way it will ever cease being a threat is if we destroy it.”

“Let me tell you something about war, striker. Might matters far less than strategy. A mission such as the one I am about to propose to you requires strategy. It requires stealth. It requires flexibility. It requires the ability to think on one’s feet. A true warrior knows that the weapon between his ears is far deadlier than any wielded by his hands.”

She nodded. “I understand, sir. What are your orders?”

“I have followed your military career with great interest ever since I watched you slay six men with a jagged piece of metal you plucked from the wreckage of a revosled back on Anshar. As a child.”

“I learned to defend myself at a very young age,” she said. “I had to.”

“I know,” said Latro. “You’ve been trained by the best teacher of all. Life.”

“That is why,” he said, resting a hand on her shoulder, “I am temporarily granting you the rank of Chieftain. If your mission is a success, you will retain it. If you fail, it will be revoked. You are to lead a tribe of six to Galenia.”

Misilla was unable to hide her shock. “And what will we do when we get there? What can six people accomplish?”

“You’d be surprised,” said a voice from behind them. Missila spun on her heels and instinctively reached for her weapon, but Latro stopped her.

Standing before them was a tall, extremely pale older man with long, white hair, dressed in strange clothes that Missilia suspected were of ancient Earth origin.

“Especially,” he added, “when three of the six are worth ten humans apiece.”

Missilia looked back and forth between the Proeliator and the stranger, who walked between them to the railing and whistled. “Wow, man. Check out those mountains on the horizon. I could put a heck of a secret lair inside one of those bad boys. What a lovely world this is. I’m into dirt biking, lately. Wish I’d brought my Yamaha, ’cause I’m seeing lots of potential here. Boy, I’d sure hate to see it destroyed.” He turned to Missilia. “Wouldn’t you?”

“Who is this?” she demanded.

Latro sighed and lowered his voice to a near whisper. “This is… well, this is…”

Unsure of how to respond to this gesture, Missilia stood motionless until he lowered his arm back to his side.

“Guess you don’t do that here,” said Kryuss to Latro, who shook his head. “Oh well, lost art, I guess.”

“Wait a minute,” said Misilla. “Do you mean to tell me that you’re actually Richard Kryuss? That wasn’t a joke?”

“Wouldn’t be a very funny joke,” said Kryuss. “Who’d laugh at that? Most folks would just be like, ‘Wow, the Richard Kryuss, father of our civilization? Cool.'”

“You’re an artie,” she breathed, reaching out to touch the skin on his face. “But you feel so real.”

“Thank you. This new model is great, lemme tell you. Everything’s detachable now! Check this out.”

He reached up, grabbed both of his ears and twisted his head around three times before plucking it from his neck and presenting it to Missila for inspection.

“This is my default,” Kryuss went on. “I have lots of others, but I like this one best. It’s the most comfortable, for me. Less obnoxious. Oh, yes, I’ve mellowed a bit in my old age, I admit it, but nevertheless–”

“Arties are forbidden on Bellum,” said Missila. “Proeliator, you can be dethroned and imprisoned just for speaking to it. As can I!”

“He isn’t like the others,” Latro argued, “nor are his companions. They were human once. They have the minds of men. Why, he’s no different than a soldier with a mechanical leg. Besides, this is the Prophet.”

She eyed Kryuss with unimpressed skepticism. “You don’t even look like Kryuss. How did you get past our planetary defense grid?”

“He took me quite by surprise,” said Latro. “Showed up here in my chambers two days ago, with some very useful intelligence which he’ll momentarily be briefing you on.”

“Contrary to folk art depictions of me throughout the ages,” said Kryuss, I don’t look like a mashup of Kip Winger and Conan the Barbarian. Just a regular guy, here.”

“I don’t know who either of those people are,” she replied, “but I believe I understand. So, how did you get past the planetary defense grid?”

Kryuss chuckled. “Oh, honey. Child’s play. And if I can do it, so can TREE. And it will, when it feels the time is right. Your existence is an anathema to it, and rest assured, it is plotting your demise.”

“So you’ve come to help, is that it? You’re to accompany me to Galenia, along with two other Arties? Why? What do you have to gain from it?”

Latro was getting angry. “You will show the proper respect to our guest by abandoning this accusatory line of questioning.”

Kryuss held up his hand. “Nah, man, it’s cool. I kinda like this chick. Believe me, Latro, you want people like this working for you. You know, I had one, once. Saved me from getting swallowed by my own insatiable ego on more than one occasion. He respected my authority, but he never hesitated to put me in check when I needed it most.”

“We are… less tolerant of insubordination, here,” Latro informed him.

“Yeah. That’s really something you need to work on. Don’t get me wrong, I like what you guys are doing out here. That’s why I came to you first. But you’re too stiff. Too square. Loosen up a little bit, guy. Maybe lose the cape. Bit much, you know?”

Latro looked down at the ornate garment that hung from his shoulders. “It is a cloak, not a cape. And it was woven from the silk of the lumenaranea by the handmaidens of Telan himself.”

“Handmaidens?” Kryuss laughed. “What kind of medieval talk is that? Isn’t this supposed to be the future? Spaceships, robots, laser battles, so on and so forth?”

“I do not understand,” said Latro.

“Never mind. I’m sorry I dissed the cape. Cloak. Whatever. It’s obviously of great significance to you. I get it. You know, I used to have a jacket owned by Fats Domino, and I felt the same way about it. It was too big for me to wear, unfortunately, but–”

“I think this thing is malfunctioning,” interrupted Misilla.

Kryuss studied her for a moment and then slapped her across the face.

Misilla glared at him, rubbing her cheek. She said nothing.

“In recent centuries I’ve been able to access Galenia’s tree system,” he continued. “I know everything about it. They don’t know that I’ve done this. I have discovered that, located five miles beneath the ground somewhere in the Southern Hemisphere, is I suppose what you could call the network’s brain, for lack of a better term. Okay? Are you following?”

Misilla nodded. She didn’t want to get slapped again, or worse.

“I’ve tried shutting TREE down remotely, and it’s impossible. Oh, sure, I could cause a lot of damage and alert it to my presence, but the only way to truly shut her off is to go down there and throw the master switch, so to speak. Of course, it’s a lot more complicated than that, but you needn’t concern yourself with the details–I’ll handle all the fancy computering.” He wiggled his fingers at her as if typing on an invisible keyboard.

“I created TREE. There’s always a back door, in any version. Always keep a spare key to your own house.”

At this point Latro stepped in. “You and the others will serve as backup for the Arties and defend them against any attack, with your lives, if need be. This mission is of vital importance and we’ll only get one chance.”

“That’s right,” said Kryuss. “If we fail, it will retaliate. Swiftly. On the other hand, if we succeed…”

“When the other colonies learn that Bellum has defeated TREE once and for all…” said Latro.

“All of the colonies would unite under your leadership,” breathed Misilla.

“Precisely,” said Kryuss. “And then we’ll politely excuse ourselves and head back to Earth. No one ever need know I was here.”

“These other Arties,” asked Misilla, “where are they?”

Kryuss rolled his eyes. “Sleeping, believe it or not. Big trend on Earth right now, sleep cycles. There’s a growing belief that a healthy human psyche needs to dream. New age nonsense, if you ask me. You’ll meet them when we depart for Galenia.”

“And when will that be, sir?” she asked Latro.

“In the morning,” the Proeliator replied. It’s a two-year voyage, but you won’t be conscious for it. Go now and make preparations.”

Inside, Misilla was panicking. Eskil and Morten had known surprise deployment was a possibility when they’d joined to her, but that knowledge wouldn’t lessen the sting of her sudden departure.

She bowed in acknowledgment. “I was born ready, my Proeliator.”